it takes something special (although i’m not sure what), to make you actually feel like a through and through kid again. as i was riding my bike to work on monday, i realized how much i felt genuinely like an 8 year old, on her way to the first day of school. i was wearing my playclothes, clutching my lunchbox, and dragging my scuffy pink vans on the sidewalk as i leisurely pedaled my bike. (i think i had purple ‘roos when i was 8, which is a good enough comparison. remember those? they had little pockets you could stash money in.) the sun was shining, the sky was blue, and there was a brisk breeze that was just swift enough to tease my hair about playfully. i felt like finding a sandbox or a swingset. but i knew i had to go to work, sadly enough.

so later in the day, i actually did go to my first day of class (my lone summer course, history 364). after the professor strode into the room i instantly felt 8 again. i knew he had a wacky wardrobe, but this was just too much. i looked at billy, who was trying hard not to look at me, because he knew that i would cause him to laugh. i covered my mouth with my hands and giggled under my breath. i had to put my head down on my desk to calm myself down. when i finally got the nerve to look up, i looked at billy again, who was still looking straight ahead dilligently. i then looked at the professor, bit my lips, and turned on my most serious facial expression. it was hard though, for he was wearing a lemon chiffon coloured short sleeved button up shirt, and these canary yellow trousers from the 1970’s, and brown orthopedic shoes. not only was he not even close to matching, but you could see through his pants! seriously! the man was wearing black briefs. and we could see them. personally, i think underwear should be one of those enigmas, that leaves you to wonder. like, i could turn to billy and say “dude, i bet our professor wears striped boxers.” and billy would remark, “no, he is more of a black briefs sort of guy. i can tell. i am an underwear analyst.”and i would nod, and we would go on, safe in not knowing the truth. but no. we had to find out. its not like we had any choice in the matter.

i had to be good all class period, to keep from looking directly at his pants, or at billy, who i know would send me into a laughing fit if he made the right gesture or expression. when we finally ran downstairs after class, we both bursted out laughing. it was like something out of fifth grade. and it brought to mind the old chant we used to bestow on unfortunate classmates who happened to rip their pants out in recess….”i see london, i see france, i see billy’s underpants! they might be purple, they might be pink, i don’t know, but they sure do stink!” billy was probably the unfortunate recipient of that song on several occasions, because i can remember seeing his underpants a lot when we were kids. i also had the lovely experience of splitting my pants as well. i was 8, and we were doing aerobics of some type in p.e. class. i was doing some kind of jumping jack thing, and all of a sudden i heard a ripping noise. lo and behold, it was a third grader’s worst nightmare (aside from peeing your pants, which billy did once. or puking in the hallway. as heather g. once did, while i was hall monitor. it was spaghetti too.) luckily, i had a long enough shirt on that you couldn’t see my underpants. that made the experience not quite-so-mortifying. but it certainly wasn’t uplifting.

so with childlike vigor, i attacked the week. i felt young, uplifted, and just plain spiffy. aside from getting caught in yet another torrential downpour(i’m a rain goddess i think.), the week was beautiful. so when i heard about a show at mabel’s on wednesday, i was all ready to go.

mabel’s is an interesting bar. its one of those places i appreciate with a doting childlike idiocy, that some people just don’t understand. mabel’s is a live music bar, which usually boasts the best hair metal bands of the 1980’s and before. sometimes they have good rock and roll shows though, it just depends on who books what. the green lights by the bar reflect up to the rafters in the balcony and onto the stage, giving it not only an incredibly cheesy appearance, but a magical one of mystery as well. i love stuff like that. but thats because it resembles what i would have liked to have had as a clubhouse in grade school. well minus the bar of course.

opening the show was a new local band, teddy and the boozers. i wasn’t familiar with them. all i knew was the singer was this guy who i had seen moshing and doing some funky dance at some shows the previous year. and he has a tattoo of nicholson from ‘the shining’. the next band was the groovie ghoulies, a band i had seen once, when we put on a show with them and the mr. t experience. i was surprised when i found out the recently displaced b-face, formerly of the queers, was now in the ghoulies. 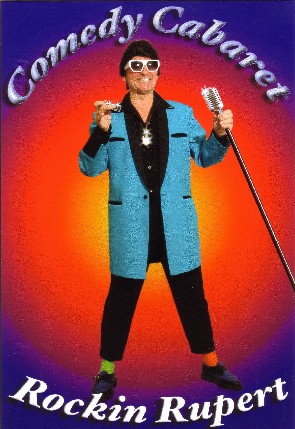 finally it was time for chixdiggit, from calgary, canada. the few times they had passed through champaign-urbana, i always missed them for one reason or another, so i was glad to finally see them. they had the slouch-stance of the ramones down to a science, and were even more fun to watch. kj, the singer, made everyone feel at home by constantly chatting with the audience and otherwise being goofy. with songs about girls, humping, and henry rollins, no one left mabel’s without a giant grin on their face.

the fun didn’t stop then though. the week kept on a rockin’ and a rollin’. after watching “re-animator’, the cult horror classic of 1985, i enjoyed a treat that generally kids only appreciate. taco bell’s cinnamon twists! it was like being at a slumber party again, without the ditzy girls. a non-ditzy girl whom i work with, gretchen, told me about a show in bloomington on friday night. she thought it was a japanese punk band of some type but couldn’t remember the name. i was interested, so i decided to investigate. i couldn’t procure a telephone number for the establishment, or a listing in any shows list, so i was discouraged. billy and i both figured the band was a no-namer anyways, but we went to bloomington to see what we could find out, and if all else failed, we could always see a movie. we decided to go to mother murphy’s, the good record store on the ISU circuit. we looked through piles of used vinyl, and i found a 7 seconds LP, as well as a man…or astroman? LP, and got them for a little over eight bucks together. i decided i needed to ask the cash register boy about the show, because i figured if he wasn’t going he would probably know where this gallery place was. sure enough he knew, and he informed me that the bar was a mere block away. i felt like kicking myself. so i asked who was playing. he showed me a poster of guitar wolf! i was like “GUITAR WOLF?!” and he was like “yes.” so billy and i went and got ice cream, and hung out until the show started.

the gallery was a dive, but it was a cool and trashy place to have rock n’ roll shows. it was in the upstairs of the bar, complete with wood paneling and black and white tiled floors. there was a pool table, but it must have been for midgets, because it was about a quarter of the size of a normal pool table. billy speculated that it was so the games would go faster and that they might make more money off of it. it was a good point. soon, gretchen showed up with stephanie and her boyfriend billy, and we watched the show. the first band was a local, the malcontents. they were pretty good, and sounded like a bad religion-misfits-black flag hybrid. the next band was, well, i didn’t catch the name since it wasn’t on the fliers i saw, and i couldn’t tell if they said it when they were playing or not. it was ‘eric oblivian’s new band’, and they rocked harder than a jawbreaker. by this time the kids were getting a little rowdy, and it ws starting to get very hot up in the attic. with only one fan, and no air circulating system to speak of, it only grew more hot. of course there was about 50 people smoking profusely, and this didn’t help with the oxygen supply, but i decided my best option was to stand on a chair in the back of the ‘pit’. it turned out to be a good seat. finally guitar wolftook the stage. the drummer whipped out a comb and started freshening up his ‘do, and the others stood on amps peering around the room through their shades. then they started rocking out, the way only a good rock and roll band should. the fun went on for about an hour, and the room grew only more stuffy. i was amazed to see that the band insisted on wearing their leather jackets through the entire show. i was sure one of them would fall over sooner or later. but they didn’t, and the singer, dripping with sweat, even managed to crowd-surf without slipping out of everyone’s hands. they played one song that lasted a very long time (with numerous chants of ‘lock n loll!’), but most songs were punchy and straight up, and bled together like a ramones set. the recordings of guitar wolf can’t even hold a candle to the intenseness of their live show, so if they come near you anytime soon, do yourself and favour and check them out!

we returned back to champaign pretty late, but i needed to get my step-pop and dad father’s day cards and gifts, so we made one of those notorious 2:30 am trips to wal-mart. there was not only no one there, but there were no checkouts open, and no way to manuever through the aisles. it was like a maze of boxes. i couldn’t believe how expensive cards were, i guess i spent about ten bucks on four cards, for those four debonair gents in my life(my two dads and two grandpops). i also got a room freshener that smells like sweet tarts! i was pretty psyched. i was too exhausted and deaf to get excited at looking at the toys, so we left after that and went to bed.

with the morning, my childlike innocence sorta faded away. this is simply because as a kid i would roll out of bed on saturdays anytime and watch bugs bunny and friends. but now that i am old i have to get up early and go to work. sometimes growing up is the biggest crock. and if growing up means no rockin’ and rollin’, then count me out.now my the remainder of my weekend will be spent bestowing thanks upon my fathers and grandfathers, and regaining the hearing capacities that i lost last night. 🙂 however, i don’t think i’ll be growing up anytime soon, thankfully.