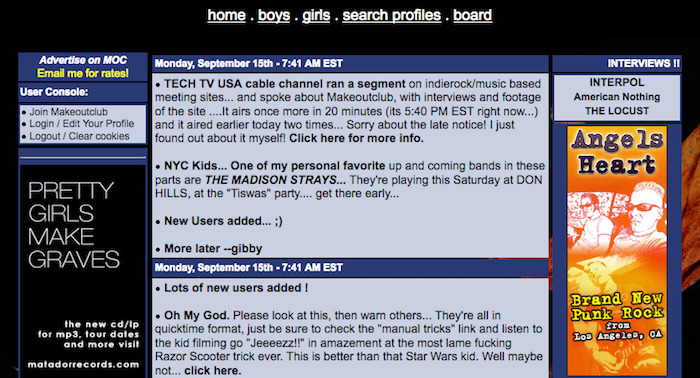 “You have to see this,” she said. The girl who would become my lifelong best friend and I were working a long, slow shift in the basement of the college library.

It was a black web page with a centered gray frame with a picture of a guy from our school, Reed Richards (Not his real name!), and a text box with Smiths lyrics and a list of bands on the right. I scrolled up and down the page, and it was full of other gray frames with other pictures and other lists of bands or lyrics or interests or straight edge affirmations or jokes or random thoughts, along with contact information on ICQ, AIM, and Email.

I kept clicking the numbers at the bottom, and more pictures kept showing up. Pictures of the kinds of people we’d see at the Black Cat, where she, 21, would buy something purely alcoholic, and I, 19, would buy a coke, and we’d sneak into the bathroom and mix our own drinks. Or the kinds of people we’d say hi to at the cafeteria at school where I, with too much of a meal plan, would give her a swipe in and we would pile our plates high with a giant salads doused in blue cheese.

MakeoutClub became a little obsession for a few months. We would look in to see if Reed Richards had changed his profile. Once he showed up at a party we were at. He was handing out daisies to women and calling them beautiful. Totally tipsy, I ran up to him and said, “I saw you on MakeoutClub!” I did not get a daisy. That night he made out with Sue Storm (Not her real name!) on the couch. I think they got married a couple years later.

I later uploaded my own profile to MakeoutClub. But because this was before selfies, the only digital photo I had of myself was from my cousin’s wedding the summer before. I was wearing a short, bright pink Hawaiian print dress from a department store. I was smiling. It was not right at all for MakeoutClub, but it was all I had. I only got messaged once. It was a mass message from a band, but I messaged him back anyway. I know. We met up at show we were both going to anyway. It was the band, The Anniversary. He gave me his band’s CD. He was fine.