It was 2001, and my campaign for a domain of my own had begun. I’d been plugging away on Expage and Tripod and Geocities for years, learned from the masters, had successfully hooked up our family’s VCR to the computer to capture screenshots of my favourite TV shows, and was ready for the supreme control one could achieve with a domain of one’s own. Notably, my own cgi-bin. I was 13, and I was ready.

silver-mist.org and slush.nu, both long-deceased, live on in varying levels of fidelity on the Internet Archive’s Wayback Machine. I check in on them every so often, wondering how I’ve changed (or really, haven’t changed) since I uploaded those files over 15 years ago. 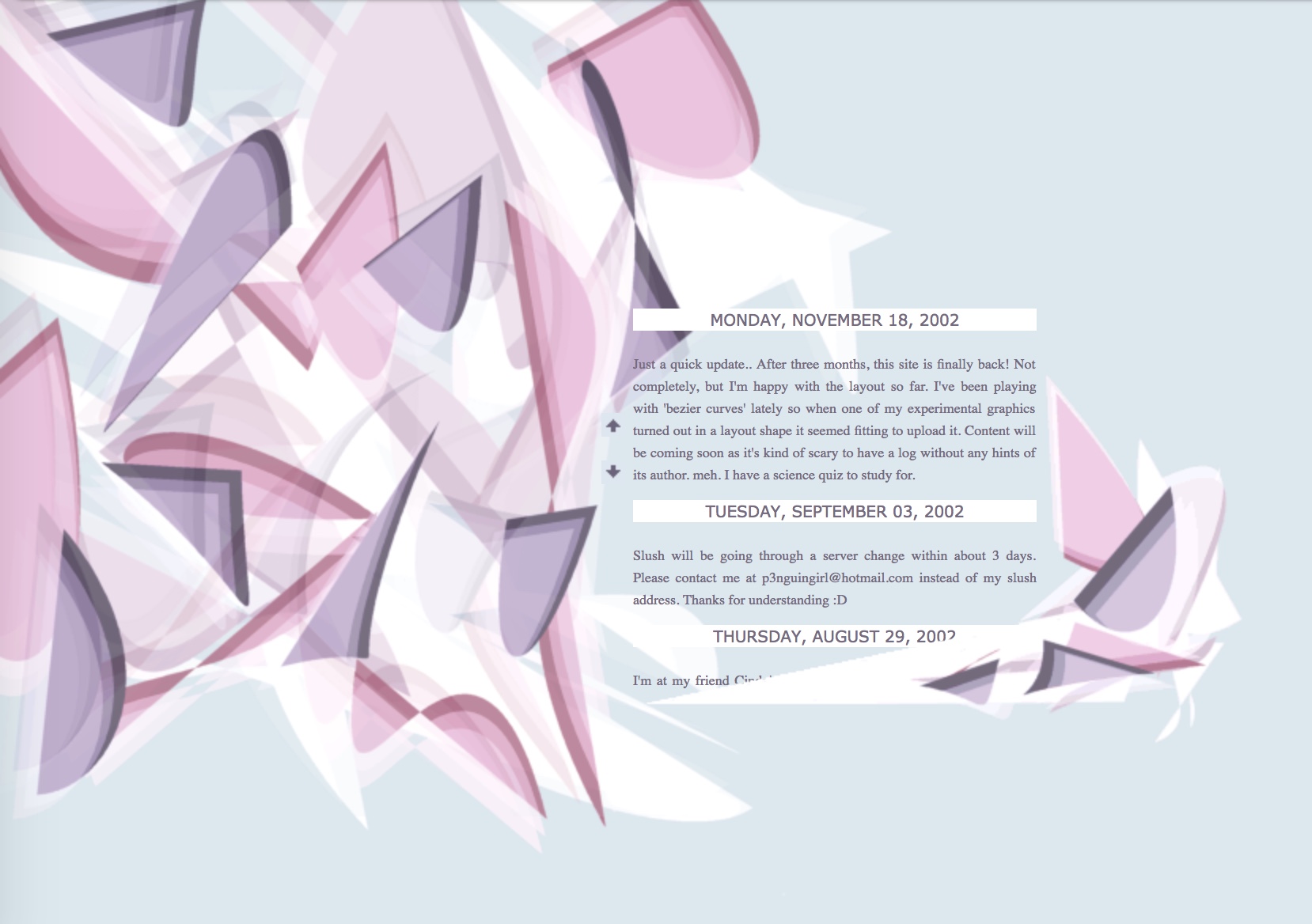 March 29, 2001 I had a new layout all planned out with iframes and huge graphics and mainly a load of shmuck, but I was just on my computer a few minutes ago drawing out little pixel people when I came across this amazing red colour.

About me I’m a 14 year old girl who lives outside of Halifax, Nova Scotia, Canada. Travel is my passion, along with webdesign and music. I love to draw and research things I’m interested in. I love IKEA furniture and you can be sure that when I buy a house, that’s what it will be filled with. I speak English and French fluently, but I still feel as if I’m missing something. I don’t enjoy school, but I don’t hate it either. I think it gets too repetitive for my liking, but yet when a project has to be done, I give it my best and it gets done surprisingly well. I’m known as the smart geeky girl, but I have an unfortunate perfectionistic attitude when it comes to school work. When I get older I’d love to be able to fly an airplane, something I’ve wanted to do since I was a young child.

September 2, 2001
Ok, I finally got this all to work- 12 hours later. Hmm, seems the problem was that I forgot to add the subdirectory that the blog is in, it’s all a mess anyways. I’m sitting in Cindy’s computer room, taking our anger out on pieces of paper and mutilating them with a staple remover. I wish I had a webcam right now, lol.

I’m leaving on a jet plane..
Slush will be back as soon as I have time to create a better domain. I’m not satisfied with it, and I won’t stop trying until it means my standards. 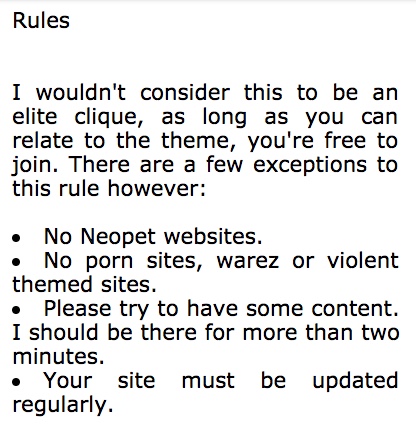 Don’t even think about using an older version of IE. God only knows what the layout would’ve looked like then.

We did get our midterm reports though, a poor excuse for a report card. I got all “mostly”s, the highest you can get, the other ones were something like “sometimes” and “seldom”. So that’s pretty good.

Christ, not even the report cards were good enough. All “mostly”s.

August 16, 2002
Dad decided that it was crucial that we have additional USB ports on our computer so I have been computer-free for that last week-ish.

And finally, some life advice:

August 17, 2002
Fifteen. One-Five. Ten plus five. Half way to thirty. A quarter of the way until sixty. Wow. I did a lot of thinking today, mainly about how I should live the rest of my life and what will help me right now. It might be beneficial to you (and that is why I’m writing this down) or you may just skim over it and click on the first link you see.

Number One – Live every day as if it was your last, try to make the most out of every day, don’t worry about the future and don’t regret what has happened in the past.

Number Two – Eat food that’s as natural as possible. As a general rule of thumb, corn should look like corn, fish should look like fish, cheese should look like cheese, etc. The darker the vegetable the better. Starving yourself will make you heavier in the long run as your body will assume you’re dying and will store as much of what you do eat as it can.

Number Three – The English language (and pretty much every other language for that matter) can be simple or complex, strive to discover new words and as a result, you’ll be able to communicate your thoughts easier. (That doesn’t mean you should attempt to use words like sesquipedalian and prelapsarian in every second sentence)

Number Four – Try to keep your thoughts (especially negative ones toward other people) to yourself. This doesn’t mean you can’t speak your mind, protest or debate your beliefs, just try and be nice about it. You don’t have to put other people down to bring yourself up.

Number Five – Life will go on whether you know what you want to do or not. Try to steer yourself in the right direction, but don’t count on anything. Have an alternate plan, a back-up in case something gets in the way.

I was going to keep on typing, but it’s now time for me to go to bed and my mother is pointing at her watch. I’m starting to sound like one of those useless self-help books and my freshly chipped tooth hurts like mad. Goodnight and thanks to everyone for their birthday wishes :) 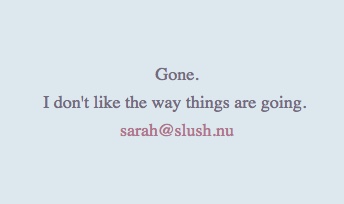